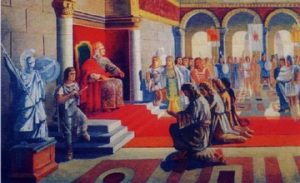 In n century BC the independent Armenian States were the Great Armenia, Armenia Minor, Tsopc and Kommagena. Other Armenian countries were occupied by foreigners.

Armenian Kesar of Great Armenia Artashes I the Kind (186 – 160 BC) of Yervandouni Dynasty (which came from Haykian Dynasty) established the Dynasty of Artashesouni and began to unite Armenia.

In the result of his activity the Great Armenia re-established almost his full power from the river Cour (Kura) to the river Tigris, Armenian Mesopotamia, Korduk and Armenian Mountains; from the Caspian Sea to river Euphrates and basin of river Chorokh to the Black Sea.

As the King of Tsopc became Merujan, son of Zareh of Yervandouni Dynasty which came back also to the throne of Kommagena (163 BC) [68, p, 23]. In the inscriptions on stones (see Item 2.15) the King Artashes I called himself as “Artashes, the king Yervandouni, the Good (Kind) son of Zarekh”.

He founded in Ararat valley the new capital town of the Great Armenia – Artashat. Movses Khorenatsi wrote: “Artashes ••• created his town, with the best view of the capital town”. Plutarkh wrote about Artashat ”the very beautiful town”.

Armenian Kesar of Great Armenia Tigran n the Great, King of Kings (95 – 55 BC) led politics of development of economical and defensive power of Great Armenia and deliverance of other Armenian Kingdoms from Roman and Parthian aggression.

He reunited with the Great Armenia Tsopc (94 BC) and Kappadokia which was under Roman protege. In 86 BC he delivered from the Parthians Armenian Mesopotamia (Edessia, Mtsbin and other), where from the old time was Armenian Dynasty of Abgarian (Yervandouni).

He returned into the Great Armenia the regions occupied by the Parthians: “Seventy valleys”, Nina, Arbel (Adiabena) and other parts of Mesopotamia and also Ekbotan, Atrapatakan (Atropatena). 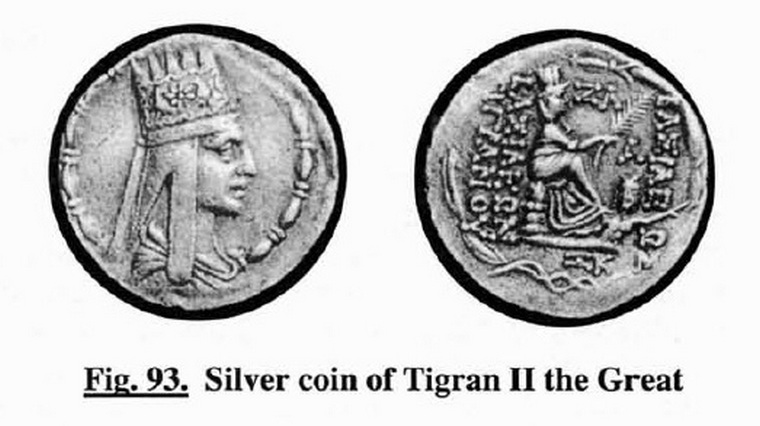 The lordship of Tigran II the Great propagated also over Kilikia, Phoenicia, Kommagena, Syria, Palestine with Judea and in the North over Iveria and Agouvank. Ploutarch tells that “Around Tigran were many kings with the statute of servants” [68, p.26].

The capital town Artashat was at the North part of the large Great Armenia, so Tigran the Great in 80 BC built another capital town Tigrannakkert (with theatres) in the Agdznik region, southward of the Lake Van.

Ploutarkh tells that “Tigrannakkert was very rich town with big treasures and expensive bestowals for Gods, because the private persons and lords in eager rivalry widened and beautified the town struggling to be ,. compliant to the King” [68, p. 26].

They wade Euphrates, came via Tsopc, besieged and came into the Tigrannakkert (when Tigran II the Great was absent). In 68 BC Loukull went to Artashat direction. But near the river Aratsani was met by Tigran II the Great with Armenian army which shattered Roman army and banished them out from Armenia (68 BC).

In 66 BC from the side of Kilikia Armenia was attacked by Pompey with lOO-thousand Roman Army. At the same time Armenia from the East was attacked by Parthian army with King Phraat Ill, who came to the Ararat valley and besieged Artashat, but was shattered by Tigran II the Great and banished out from Armenia.

Seeing this, Pompey disbelieved in his victory and they with Tigran II the Great decided to conclude the agreement of peace between Armenia and Roma (66 BC). Pompey recognized Tigran II the Great as the king of Great Armenia in its native boundaries: from basins of Euphrates and Chorokh (in West) until river Cour (Kura) and Caspian Sea (in East) and Armenian Mesopotamia (in South).