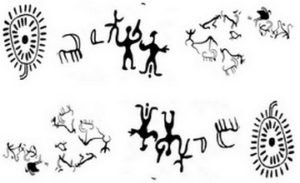 We, Armenians, know very little about our progenitors. The past often seems to us as an era of incomplete knowledge and backwardness. But no! Successive epochs not always represent a qualitatively higher level in relation to the previous ones.

Much of what had been created in the past has not been unraveled so far. Swiss writer Erich von Däniken hinted at this in his book “Memories of the Future”, a work that was criticized by Soviet materialistic science. Nevertheless, the hope that we are not alone in the universe continues to live.

But now, we are talking about earthly wonders generated by the human mind. Perhaps, we often underestimate our ancestors. Or maybe we have not yet reached the level of development of ancient civilizations and therefore cannot yet understand much of their heritage.

Gegham Mountains “support” Lake Sevan from the south. From the opposite direction, they descend to the very border of Armenia. These mountains became the second home for Yerevan architect Suren Petrosyan. He has studied mysterious cave paintings for 25 years.

For a quarter of a century, he explored and sketched tens of thousands of cave paintings and came to the conclusion that these drawings represent something much deeper than the mythological work of primitive people.

“In my opinion, this simplified approach is absolutely unacceptable here,” said Petrosyan. “In general, I must say that for some reason, we have imagined primitive humans as some kind of slow-witted individuals wrapped in hide and holding a stone ax. No, their brain worked at a fairly high level”.

He then shows the sketches. There is a globe with the image of people and… hell. There also are monthly and annual lunar calendars. Portrayals of the birth of the living world from the initial chaos. The images of the constellations of Vahagn (as the ancient Armenians called their god of the sun and war), Cygnus, Draco. And scenes of intimacy between men and women. And was it four, five thousand years ago?

“Yes, experts confirmed that the drawings were made in the 3rd-2nd millennia BC,” said Petrosyan. “It is amazing how exactly our distant ancestors depicted the Earth and the cosmos. But why did they need it? Only to give free rein to their rich imagination? I’m sure not.”

The scientist put forward an interesting hypothesis. In his opinion, cave paintings are nothing but a figurative expression of knowledge and concepts mastered by the people. These ancient humans made them so that their descendants could use them.

By analogy with the famous Matenadaran – the repository of ancient manuscripts in Yerevan – Petrosyan called the complex of images in the Gegham mountains “Karadaran.”

Strangely enough, over those 25 years, the enthusiast has been receiving support mainly from journalists who mostly covered his work from an exotic point of view rather than scientific. The official science, including in Armenia, reacted cautiously to his search, occasionally accusing him of unprofessionalism. In order not to offend other relatives in the “great and united family of the USSR,” it was considered indecent to support the antique history of the Armenians and the creations of their hands and mind.

But Petrosyan wouldn’t abandon his ideas. And, in the end, Gregory Vahanyan, the director of the Republican telecommunication center “Search”, became Petrosyan’s associate. At Vahanyan’s initiative, the Karadaran center is underway and the corresponding work program is undergoing implementation, with a computer data bank being developed. Computers can help with deciphering the ancient ideograms because many of the rock carvings still aren’t analyzed.

“We believe that Karadaran should be paid close attention at the state level,” said Vahanyan. “I am neither an archeologist nor an ethnographer, but I am an expert in the field of socio-economic modeling, computer graphics, and computer science, and I can judge the high skill of the ancients from this point of view. They perfectly mastered the methodology of knowledge and the art of information transfer.

The structure of these rock carvings reflects the development of thinking, mathematics, astronomy, culture, commerce — in general, of all spheres of life, and I consider downgrading them to shamanism or mythology fundamentally wrong.

Yes, among the drawings, some have a ceremonial, cultural meaning, but they do not dominate in Karadaran. And the common point of view that our ancestors were primitive myth-making humans does not hold water. What primitive tribes are we talking about?

It was a state – albeit five thousand years ago – with its own laws, a data recording system, a hierarchy. After all, the drawings depict patterns of irrigation canals, topographic plans of dwellings, detailed images of carriages with wheels from five thousand years ago. In some places, you can even distinguish Armenian and Arab letters, though there are more of the Armenian letters.

All this suggests that here, lettering symbolism has perhaps been taught. But, to be fair, I cannot claim that the letters had the same meaning as now. Most likely, these are ideograms, coded information about accumulated knowledge. Nevertheless, the discovered petroglyphs quite clearly disprove that the Armenian alphabet was invented by Mesrop Mashtots in 401 AD.

The greatness of Mashtots lies in the fact that he was able to use the information treasury of our ancestors. According to one version, he had traveled for quite a long time before managing to give an alphabet to the Armenians, the one that we still use.

There is every reason to assume that he visited this Karadaran – or another similar site because the same cave paintings were found in other mountains, at least, in the territory of present-day Armenia – and studied the letters imprinted there. Of course, such a work could be performed only by a highly gifted person.

We have already managed to identify some drawings and compositions with biblical scenes. Of course, to find a match, you must thoroughly study the Bible, decipher all the symbols mentioned in it. We believe that the Bible is a guide to Karadaran, which allows us to unravel the many mysteries and secrets of humanity.”

The “Search” team took up the study of tens of thousands of images collected by Suren Petrosyan, using modern techniques of computer and video scanning. For the first time in world practice, a computer bank of cave drawings and images carved in the mountains of Armenia at an altitude of 3 to 3.5 thousand meters above sea level in the 7th-1st millennia BC was created.

However, system analysis and comprehensive research of such a huge amount of coded information require the efforts of many scientists and specialists. Therefore, the center “Search” came up with the idea of inviting UNESCO to consider the issue of reconstructing this stone encyclopedia of humanity in the territory of Armenia, as well as to declare it a cultural monument and heritage of the whole world.

It is also proposed to create an international commission for the development and implementation of the program for the re-establishment of Karadaran. Besides, it is proposed to organize an international fund in Armenia with branches in those countries where there are also cave art complexes, establish an institute for the study of the stone encyclopedia of the earthly civilization, and establish a museum of cave art.

“We call for the promotion of the revival of the stone university,” said Professor Vahanyan, “It still keeps unclaimed treasures – knowledge. And knowledge does not have national boundaries, it has universal value and meaning.”

In the pictures: one of the first images of a family in the history of civilization; a petroglyphs with images of several constellations (Gegham Mountains) in a monthly lunar calendar.