Alexander Mantashev (Mantashiants) was one of the richest oil magnates and philanthropists of the 20th century. His life was full of interesting events and adventures.

The future millionaire was born on March 3, 1842, in Tiflis into an Armenian family. He spent his childhood and youth in the Persian city of Tabriz, where his father was engaged in manufactory trade.

Being the only son in the family, he has helped his father in his business since childhood. Having moved to Manchester in 1869, Alexander began to directly supply products to Tabriz.

This period played a significant role in the establishment of young Mantashev. In Manchester, he not only got acquainted with the structure of trade but also delved into the intricacies of European business, joined in with the English culture, and learned English, French, and German languages.

In 1872, Mantashev and his father returned to Tiflis and started a fabric shop and wholesale trade business. After the death of his father in 1887, Mantashev bought the majority of the stocks of the Tiflis Central Trade Bank and became the chairman of its administrative board, which set the tone for the trade in whole Caucasus.

At the beginning of the 90s, Mantashev, already a big merchant and the head of the city council of Tiflis, got interested in a new business. Having examined and evaluated the prospects and risks of the development of the Baku oil industry, Mantashev’s firm built two factories in Baku, one for kerosene and another for lubricant oil. The company built a seaport and elevators for pumping oil and fuel oil as well.

The oil wells began to bring huge money, which allowed Mantashev to start a trading house, “A.I. Mantashev and Co”, in 1899. Subsequently, Mantashev became the stockholder of several world oil companies, which’s 51.3% of oil and 66.8% of residual oil located in the Caspian reservoir were a part of Mantashev’s company’s assets. Only Branobel and the Rothschild brothers’ Caspian-Black Sea community extracted more oil than his company.

During this period, a curious story happened to Mantashev. On his way to Paris from Vienna, Mantashev was accompanied by an exceptionally silent companion. Communicative Mantashev could not find a way to converse with his travel neighbor. And only the topic of the Baku oil industry was able to get him talking. It turned out that the only man living in Baku he knew was Alexander Mantashev. Mantashev introduced himself with a smile.

Soon, Mantashev’s companion got quite again. In Paris, they shook hands and parted. Several days later, Mantashev got invited to a secular soiree. The invitation was signed by a famous businessman Baron Rothschild, who unobtrusively made it clear that he had been Mantashev’s quiet companion.

Mantashev also made big investments in education, particularly, he founded trade schools and boarding schools for orphans and blinds. Additionally, he financed the internship of the disciples of Komitas and Alexander Khatisyan, thereby becoming one of the two most significant philanthropists supporting the Armenian history and culture.

Mantashev’s philanthropic activity built him a good name in the Armenian community. Thanks to his efforts, the Armenian charitable foundation in Caucasus was established in Tiflis and the new building of the Nersesyan theological academy as well as the sacristy of the Armenian Catholicos in Etchmiadzin were built.

But Mantashev’s most crucial deed in regard to his input into the Armenian culture was and still is the Surb Hovhannes Mkrtich Church (Church of Saint John the Baptist) in Paris, which is one of the most beautiful Armenian temples.

And that is not surprising as Mantashev spent around 1 million 540 thousand francs on its construction. Later, the businessman would ironically explain such a huge donation: “This is a city where I sinned the most”. For this act, Mantashev was awarded the Order of the Legion of Honor by the President of France.

Armenian playwright and novelist Alexander Shirvanzade would then react to Mantashev’s activities: “His spirit was the most critical factor in his philanthropy, not his financial resources. He donated out of the call of his sensitive soul rather than out of vanity.”

Mantashev was modest and didn’t like to advertise his wealth. He did not wear expensive attire and jewelry. He only had a live flower in the breast pocket of his jacket. He also didn’t have his own carriage and instead travelled on foot or by tram.

Some told that during his walks, Mantashev always had 20 gold coins worth 5 rubles. Passing near the Tiflis real school, he always “accidentally” approached one of the penniless students and asked: “How’s your father doing? Send my greetings to him!” Then, he inconspicuously put a gold coin into the student’s pocket.

Mantashev was an exceptionally communicative and cheerful person and liked to make jokes. When he was once paying off his barber, the latter reproached Mantashev for his son being much more generous. Mantashev answered: “What’s so surprising? He is a son of a millionaire while I am a son of a modest salesman”.

People often asked Mantashev for money for their needs, some for business, others for purchase of an apartment. There were plenty of reasons. Before giving anyone money, Mantashev asked them about their goals because he didn’t like to spend money pointlessly, obviously.

There has been a case regarding Mantashev’s precaution. One man once approached him and asked for 320 rubles for playing a classy wedding for his son. Mantashev answered that he didn’t have money for that and he would not have any in the near future as well.

A little bit later, another man approached him and asked for 450 rubles for his butcher shop plans. After some thinking, Mantashev told the man to visit him in 2 days. When the man visited him, Mantashev told that his calculations had been wrong and he needed 2200 rubles instead of 450. The businessman gave him 2200 rubles and told the man to address him if he needs more help. Thus, Mantashev welcomed people with goals and those who wanted to achieve something.

Mantashev’s fortune was inherited by his four sons: Hovhannes, Levon, Hovsep, and Gevorg. The most known son is Levon Mantashev, who became a successful entrepreneur and managed to multiply the fortune of his father. According to some testimonies, Levon was quite extravagant and could even be dishonest.

After the Bolshevik revolution, Mantashev’s business started to deteriorate as the Baku oil industry was nationalized. Levon fluctuated between the whites, reds, dashnaks, English, French, participated in various political projects, tried to sell his business to foreign companies. He continued his activity after emigrating, but everyone realized that he was selling air.

Russian writer Aleksey Nikolayevich Tolstoy was quite close to Levon and vividly described him in his novel “Immigrants”:

“He was a man with unexpected fantasies, a tall and handsome horseman, an oil magnate, waster of millions, which stuck to him without his effort.

Levon lived in one of the most expensive hotels in the world, Carlton on Champs-Élysées in Paris. Thanks to it, he managed to hold creditors in small accounting offices, restaurants, and tailors. But his circles have been steadily shrinking. This has been tormenting him in his nightmares”.

In 2012, a monument in honor of Armenian entrepreneur and philanthropist Alexander Mantashev was erected in the center of Yerevan.

Mantashev’s call to other Armenian businessmen is quite famous: “Armenian merchants! Long-suffering Armenia is the shelter of your fame and your immortality. It is the God’s house, where the good memory of your deeds will be saved in its full glory before God’s and humanity’s eyes. In other museums, you will be forgotten and despised…”

Alexander Mantashev died in St Petersburg on April 19, 1911. He was buried next to his wife in the tomb of the Vank Cathedral of Tiflis, which had been renovated with Mantashev’s aid. In the Soviet era, the church and the cemetery were ruined. Thus, the graves of Alexander Mantashev and his wife have disappeared without a trace. 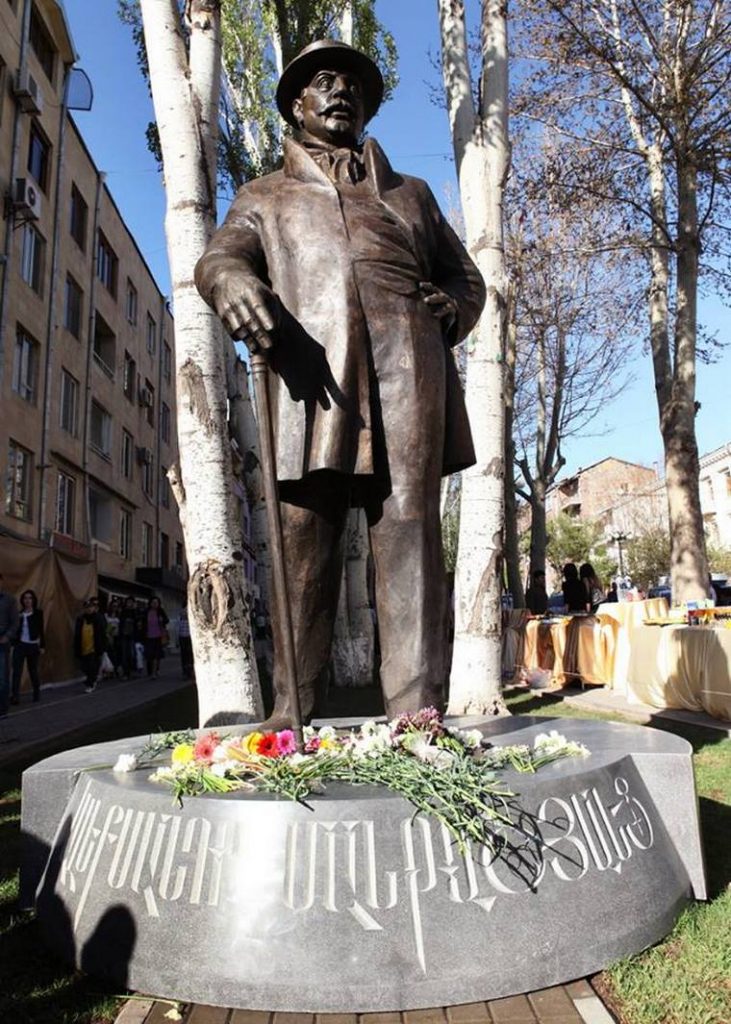