Armenian King Pap and His Struggle for Sovereign Royal Power 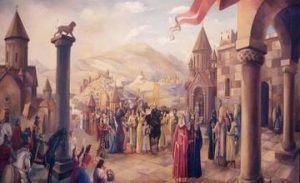 In particular, the cavalry at the disposal of the king was increased from 10,000 to 90,000 people. Such dramatic measures in regard to the royal house’s security didn’t mean that the king has forgotten about the welfare of his country. He sought complete independence from outer powers, so it would be unwise to abandon his people.

With the help of Mushegh Mamikonyan and the newly formed army, he suppressed rebel nakharars (hereditary title of the highest order given to houses of the ancient and medieval Armenian nobility) working for foreign states and subdued the outlying regions of the country.

Even stronger were Pap’s actions in relation to the church. In the context of an unceasing struggle between the kings, authorities, and the nakharars, the Armenian church turned into a large independent force.

Greatly did this contribute to the heredity of episcopal posts. In the hands of the church were concentrated extensive landholdings – no nakharar could compare with the archbishop. In addition, the Armenian Church relied on close ties with the Christian church of the Roman Empire which, in its turn, connected it with the imperial court.

In order to weaken the power of the archbishop, Pap deprived the Grigorides of the hereditary right to this position, which they enjoyed almost continuously for over 70 years. He also sought to break ties between the Armenian Church and the Roman Empire. This would eventually result in the creation of the modern Catholicos title.

Roughly 15 percent of the church lands were confiscated, which resulted in the reduction of massive taxes. The elimination of tithing seriously shattered the material well-being of the Armenian church. 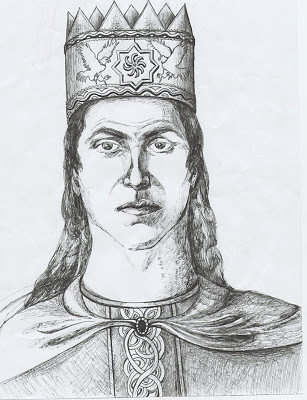 Pap also fiercely fought against monasticism – he shut down most of the monasteries, forced the monks to work, and reduced the number of clergymen.

Pap’s activity thus greatly contributed to the temporary strengthening of the sovereign royal power in Armenia, with the improvement of the material well-being of the people as a significant side effect and a separate goal.

Having come to power with the help of the Romans, Pap entered into diplomatic relations with Shapur II, seeking to balance out the foreign policy of Armenia to strengthen its independence.

The policy of Pap caused a sharp discontent of the nakharars. With their assistance, Pap was killed by the Romans in 374.

After the murder of Pap, the struggle of Rome and Persia for Armenia has resumed. Nakharars took an active part in it. The result of this conflict was the division of Armenia between Rome and Persia in 387.

The outlying regions of Armenia were taken over by rival powers. The remaining “Middle Country” was also divided, although its areas would still be ruled by the vassal kings.  Persia took about 4/5 of Armenia’s territory while the Roman Empire got only around 1/5.

The power of the royal family continued to exist in Roman and Persian Armenia until 391 and 428 respectively. Then, the control over the country was completely seized by the nakharars, who weren’t in favor of the idea of 100% independent Armenia.

This is a vivid example of venality and dishonorable policy of inner Armenian forces, not caring about the identity of their nation. They have been poisoning Armenia long before Pap and they do it now. And as long as there is cash flow from outside, they do not care about the suffering of their relatives at the Armenian state borders today and forget about their ancestors killed in the Armenian Genocide.

Some may say that Pap has been doing all the improvements for his own power, but it is undeniable that his actions lead to the overall development of Armenia. We will never find out whether Pap had the needs of his people somewhere in his mind when doing his policy or just didn’t care about his nation.