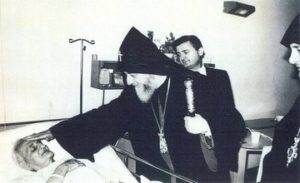 The last blessing of Misak Torlakian by Vazgen I, Catholicos of All Armenians

In the book of Gabriela Lazian published in 1936 in Athens, the trial of Torlakian is described:

“The defendant, Misak Torlakian, sat on the bench in front of the judges. Next to him was a Turkish policeman and a translator. Behind them around the table of the Attorney General were the representatives of the international media.

The right arm of Misak Torlakian was bandaged. He was of medium height, dark-skinned, with thick black hair and a small black mustache above the wide mouth. His cheekbones were prominent, his eyes were black, large, and deep-seated. The eyes were focused, indifferent.

He maintained the same appearance, the same posture throughout the entire process, both when the witnesses shared their nightmarish memories and when the defenders exchanged sharp remarks. Misak sat still, no change in the face.

This unfortunate man who had lost all his relatives in his apartment in Ermenikend had three gunshot wounds and still carried a bullet in the body.”

Among the witnesses were those Armenians who had escaped death in Ottoman Turkey and again saw how the strategy of Pan-Turkism continued in Soviet Azerbaijan. Among the witnesses also was the “Red Princess” Tamara Alekseyevna Volkonskaya, the sister of mercy of the 1st Caucasian Cavalry Regiment who was wounded during the massacre of Armenians in Soviet Baku.

Behbud Khan Javanshir was born in 1877 into the family of Azad Khan in the village of Azad Qaraqoyunlu, Javanshir district, which at the time was a part of the Russian Elisabethpol Governorate. From 1890 to 1898, Behbud Khan studied in the Tiflis real school.

In 1902, he entered the Mining Academy in Freiburg in Germany, from which he graduated with honors in 1906. Being fluent in German, Behbud-bek traveled to London where he studied advanced courses and learned English for a year.

Returning home in 1907, he began working in the oil fields of Shibayev as a chief engineer. He was a member of a charitable society and, as stated in his report No. 29 of August 28, 1907, addressed to the Ministry of the Interior, a member of the secret anti-state organization “Difai” (along with Ahmedbek Agayev, Geraybek Geraybekov, Mammed Hasan Hajinsky, Isabek Ashurbekov, and Niftali Beibutov).

From June 17, 1918, he held the position of Minister of the Interior of the Azerbaijan Democratic Republic. From October 6 of the same year, he replaced the Minister of Trade and Industry. Later, being a member of the country’s parliament, he established the commercial organization “Deyanet” on July 18, 1919.

After the establishment of Soviet power in Azerbaijan, Behbud Khan Javanshir managed to avoid imprisonment with the help of Nariman Narimanov. He also continued to work as an engineer in the already Soviet oil fields of Baku.

For almost half a century, 47 years old Misak Torlakian had the memory of the assassination of “Talaat of Azerbaijan”. He carried this memory until the day of his death in 1968 when he met Vazgen I who “put his right hand on his forehead and blessed him.”

It is possible that the archives have confirmation that this was not the first meeting of the Catholicos and Misak since the member of “Nemesis” had lived in Romania until 1941.

It was during these years that Levon Baljian (the name of Vazgen I outside of his Church service) graduated from the Faculty of Literature and Philosophy of the University of Bucharest, continued his secular education, and also began to delve into religious issues, becoming more familiar with the Armenian Church. He established personal contacts with the head of the Romanian Diocese Archbishop Husik Zohrapian, which led him to pastoral service.

So, on July 18, 1921, when the young future Catholicos was studying at the Misakian-Kesimian Bucharest Lyceum, the members of the “Nemesis” Yervand Fudukian, Harutyun Harutyuniants, and Misak Torlakian carried out their act of retribution in Istanbul.

In October 1921, the tribunal found Torlakian guilty of murder but not responsible for his actions since he had been affective during the assassination. He was sent to Greece and soon released.

Misak left Romania in 1941 after WWII had begun. He already was an experienced fedayi: he and his wife had actively participated in the self-defense or Trebizond and in the Battle of Aparan (May 1918).

During WWII, Torlakian was actively engaged in the salvation of the Armenian population and prisoners of war. He personally conducted an operation to seize secret Turkish documents regarding plans to spread Pan-Turkism and seize the Caucasus, which forced the Nazis to distrust the Turks as allies.

In West Germany, Torklakian helped Armenian refugees, many of whom would move to the United States thanks to him.

From 1952, Torlakian lived in California. There, he wrote his memoirs titled “With my days” which would be published several times after 1953.

In his memoirs dedicated to the assassination of Behbud Khan Jivanshir, Misak Torlakian described in detail how the former Minister of Internal Affairs of Azerbaijan arrived in Polis-Istanbul as a sales representative of the Bolsheviks, possibly with the goal of taking his wealth out of Baku.

In November 1968, Vazgen I arrived in California with an official visit. It was then when he met Misak for the last time.

The Catholicos was aware of the negative consequences of Misak’s deeds. After all, 80-year-old Misak Torlakian dying in one of the Californian hospitals had killed one of the leaders of “fraternal Azerbaijan”.

However, the Patriarch was also well aware of the fact that great things are needed for the existence of a nation, and its Patriarch must be the first among the standard-bearers of great deeds. Moreover, the Genocide memorial Tsitsernakaberd had been built in the previous year, although its individual elements would be worked up until the 1990s.

The arrow of the memorial symbolizes the split Armenian people, the smaller part of which lives in Armenia, and the rest live in the Diaspora. And with the blessing of Misak, Vazgen I alleviated the pain of the entire Armenian people. 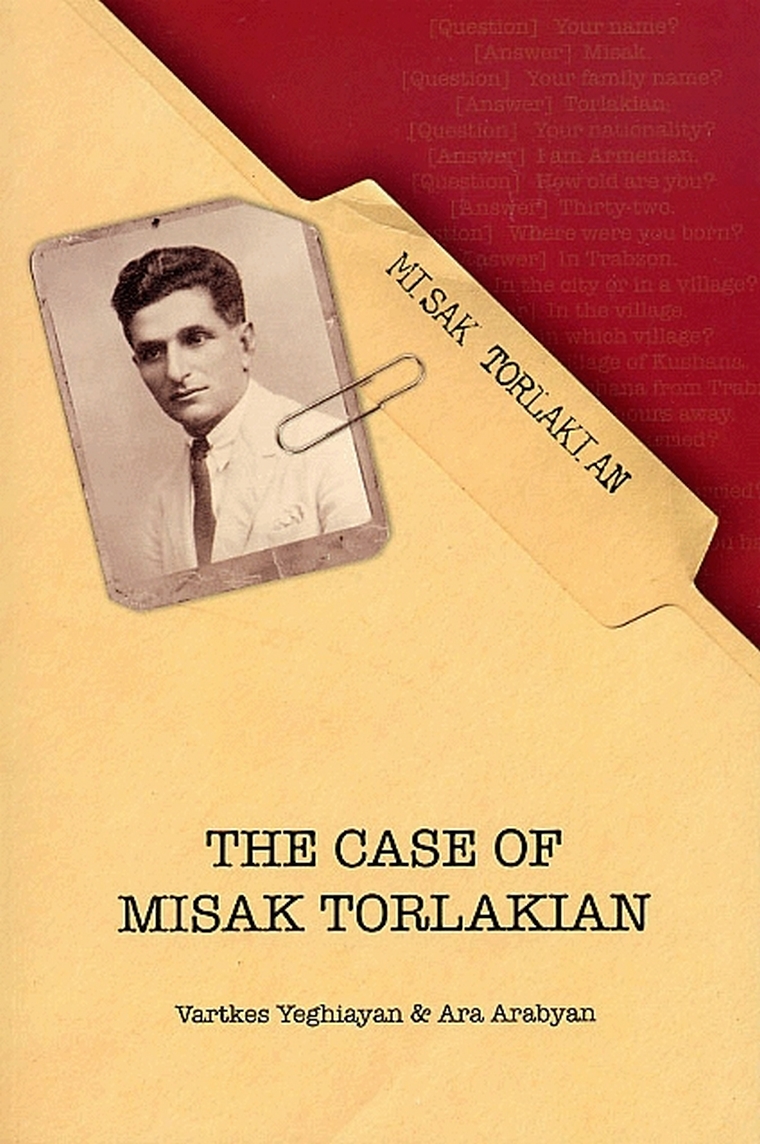