On this photo, starved Armenian orphans from Alexandropol stand in a line before the orphanage of the Near East Relief organization, wearing rags in the severe cold of winter. The orphanage was running short of space, so they almost had no hope…

Tens of thousands of Armenian children became the victims of the Armenian Genocide of 1915. Those who managed to escape death would become orphaned. The organization Near East Relief (at the time named American Committee for Armenian and Syrian Relief) undertook a large-scale rescue mission in order to save Armenian orphans and provide them with everything necessary for survival.

Near East Relief operated in Syria, Lebanon, Greece, and in Armenia. After the signing of the Armistice of Mudros, the organization would also operate in the Ottoman Empire.

After the signing of an agreement with the mayor of Alexandropol (now Gyumri) Levon Sargsian, the Committee occupied all of the orphanages of the city – 170 buildings in total that used to be the barracks of the Russian troops.

The Committee sought to gather all homeless orphans from the streets of Alexandropol and house them in hospitals and orphanages. The orphanages “Cossack outpost” and “Northern” housed girls, while “Polygon” housed boys. Called “city of orphans”, this was the biggest orphanage in the history of mankind.

More than 100 starved, half-naked, lousy, and sick children were waiting on the streets, every day hoping that they would find shelter in the orphanage thanks to the efforts of Americans. 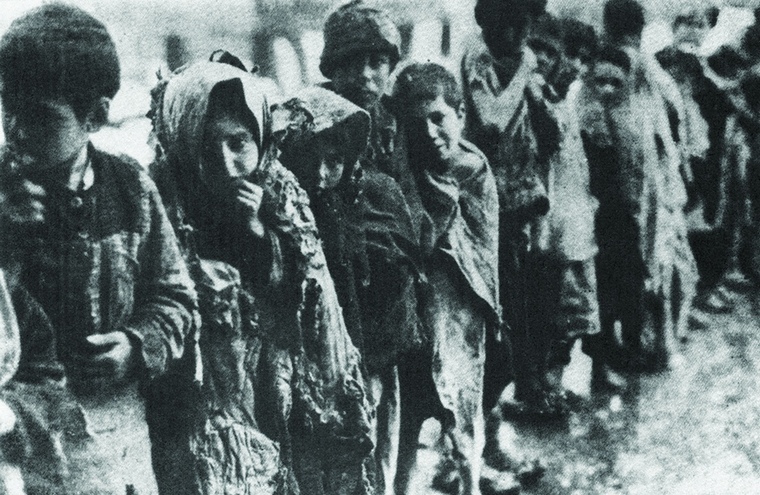 Tags: Photo of a Line of Orphans in Front of an Orphanage