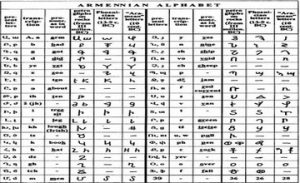 Present Armenian Alphabet is the same Mashtots Alphabet of 406 AD and has 36 letters plus three additional letters (և Օ Ֆ) which were put later at the end, so 39 letters total. Analysis shows (see below) that letter “Օ ” was in Armenian old Alphabet, but Mashtots excluded it, perhaps, as having meaning of “(heathen) soul” and superseded by letter “n”, he replaced also the letter ”Արեվ” from the second position in old Alphabet as important part of the word “Ր “‘ (the Sun)” to the fifth position from the end in his Alphabet.

We can see that all letters are the same or have almost the same structure”, Armenian Alphabet is rich (39 letters) and represents many phonetic sounds (so it could be used also as international transcription). 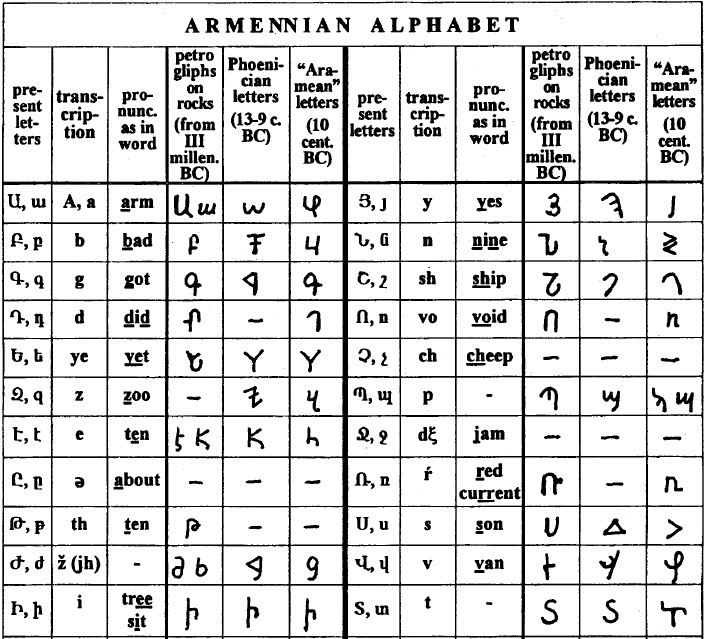 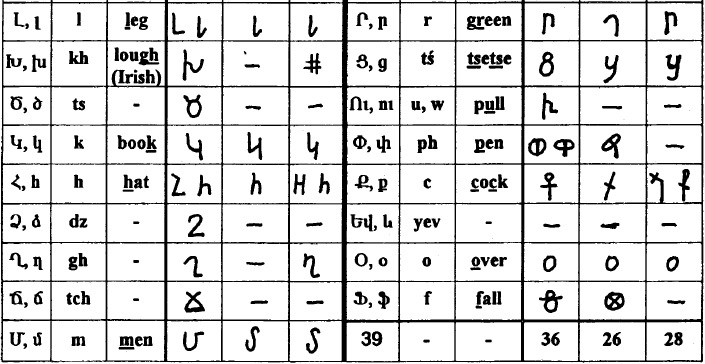 Present Armenian language has been developed during many thousand years (it began more than 40000 years ago) and is rich. It has many thousand roots, 150000 words and about 60 dialects. The words, beginning with “ar”, make a big part, about 3% of all words [72], so “ar” is the main root of Armenian words.

Armenian grammar is also rich. For example, nouns have seven cases, verbs have 14 tenses, etc. Some dialects now are almost forgotten. Even some of dialects of Armenian population of Anatolia (Asia Minor) are almost forgotten because of the genocide of Armenians taken place in Turkey at the end of XIX and beginning of XX centuries AD.

There is an interesting book by M.M.Zourikian about almost forgotten Arabkir (the big town, now in Turkey) dialect, printed in Russia in 1993 [64]. This book consists of many examples of words identical in Armenian, Russian and English.

An extract from the book “Armenians and Ancient Armenia” by Paris Heoruni.