Anatole France was a French writer, a member of the French Academy (1896), and a Nobel Prize winner in literature (1921). He consistently spoke in defense of the oppressed peoples, including the Armenians of Turkey.

In the 1894-1896, he organized a collection of donations for the victims of the Armenian massacres. Besides, he was in the editorial office of the journal “Pro Armenia”, which published his works. He was an active member of the committee “In defense of Armenia and Macedonia” (1903-1904).

Giving a speech at a meeting in Rome (May 1903), he said: “Sultan Abdul-Hamid II is a pathetic monster … He killed and burned alive 300 thousand Armenians and with vile caution methodically destroys the orphaned nation…”

He was in friendly relations with famous representatives of the Armenian diaspora, including a writer and public figure Arshak Chobanyan (Արշակ Չոպանյան) and artist Edgar Chahine (Էդգար Շահին), who created a portrait of France.

In 1917, the Catholicos of all Armenians Gevorg V sent an appreciation letter to the writer.

The translation of France’s speech published below, which he gave at a meeting for the defense of Armenia and Macedonia on April 9, 1916, appeared in the magazine “Armenian Herald” (1916, No14).

“When twenty years ago, by the order of Sultan Abdul-Hamid, Armenia was flooded with blood, in Europe, there were only a few votes that protested against the strangulation of a whole nation.

The rest stayed mute. Many felt deep pity for the Armenians, but since they usually turn away from the unfortunate, they found reasons to blame them for their weakness. Some people, having risen to the protection of the executioners, thought that Turkey rightfully punished rebels or avenged the Turks devastated by Christian moneylenders. Others saw the intrigues of Britain or Russia.

However, despite the protests of the Armenophiles and the timid representations of some powers and contrary to the assurances of the Ottoman government, the persecutions of the Armenians continued, though skillfully hidden.

The revolution leading to a change of government did not lead to anything good as well. The Young Turks, having attained power, surpassed Abdul-Hamid’s cruelty in organizing the massacres in Adana. Over time, the eternal torment of the Christian people dulled our sense of compassion, and the Armenians were left alone, alien to civilized Europe.

We only knew the Armenian people through the blows they had received. We had no idea about their past, genius, or their hopes and aspirations. It was unclear why they were being exterminated. So years passed. A World War broke out. Turkey joined it as a vassal of Germany.

Both Armenia and the causes of its martyrdom immediately appeared before France in a different light. We realized that the age-old unequal struggle between the Turk-oppressor and the Armenian is a struggle of despotism and barbarity against justice and freedom.

And when we saw this victim of Turkey with barely alive light in her eyes, in which a ray of hope flashed, we finally realized that it is our sister that is dying in the East. She is dying just because she is our sister, whose crime is that she shares our feelings, loves the same things that we love, thinks the same way we think, believes the same as we believe, and, like us, appreciates wisdom, art, poetry. Such is her reprehensible crime.

It is therefore clear that the French should express their greatest compassion at a time of that nation’s great and noble torment. Here and now, we are fulfilling our sacred duty.

We pay homage to Armenia not only for its eternal torments but also the steadfastness with which it tolerates them. We praise them for their unanswered love for our civilization. For Armenia is related to us, and, as one Armenian patriot said, it continues to be a Latin genius in the East.

Their story, which Mr. Paul Deschanel has just outlined to us, attests to the eternal desire of preservation of the intellectual heritage of Greece and Rome. It can be said that more than five hundred thousand Armenians died for our sake and with our names on their lips.

“Christians,” the Turks tell us, “prepared a grandiose mutiny and held out their hand to the enemies of the crescent.” But with such a charge, the murderers cannot justify their crime. Though it is true, Armenians have always prayed for the victory of France and its allies.

In general, the extermination of this people, which loves and appreciates us, was predetermined by the Turkish government. By the order of the Sultan and with the benevolent assistance of Germany, all Armenians – men, women, and children – were exterminated from Samsun to Diyarbakir.

Armenia is dying, but it will be reborn. Those drops of blood that are still there are the precious blood that will give birth to heroic offspring. People who do not want to die will never die! After the victory of our armies fighting for the truth and freedom, the Allies have many other tasks.

And among them is the sacred task of restoration of the life of the martyr-people: Belgium, Serbia, Armenia … Bowing to them, we will say, “Arise, my sister! Do not suffer anymore. From now on, you are free to live according to your faith and genius.”

In my country, where an uncompromising struggle is now taking place between the two parties, irreconcilable opponents came together to protect the Armenians.

They were united by Mikhail Loris-Melikov, whom you see here, an Armenian Loris-Melikov, who worthily and nobly wears his name. At a grand meeting, gentlemen Lerolle and Cochin side by side with Jean Jaurès and Francis de Pressensé protested against the atrocities committed by the murderous sultan before the eyes of a shamefacedly silent Europe and demanded the full implementation of the Berlin Treaty.” 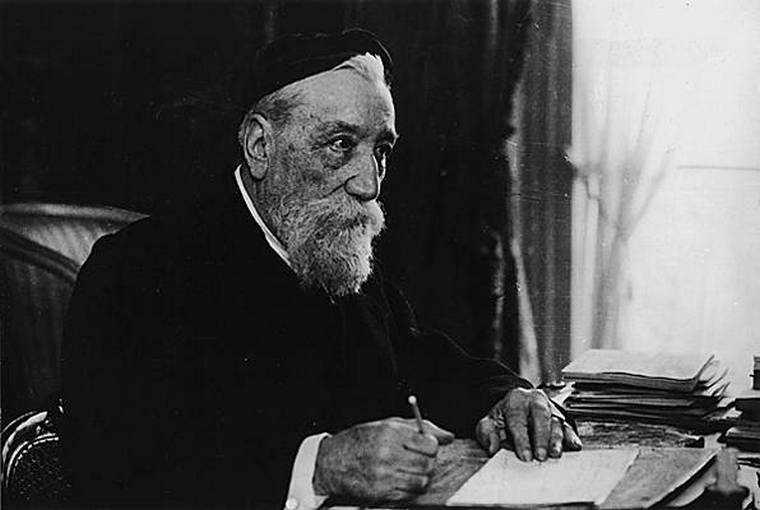