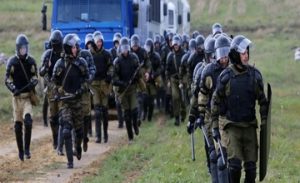 In the light of recent events at the border between Armenia and Nakhichevan, kitchen and sofa experts of questionable expertise raised hell that Armenia once again refused to resort to the potential of the Collective Security Treaty Organization (CSTO) after the attempt of Azerbaijan to violate the Armenian state border. Various individuals with surnames ending with “yan” in both Armenia and Russia also joined in the fuss.

The historical chronology of the Russian military contingent in Armenia could allow one to reasonably conclude that the peacekeeping forces of CSTO would be engaged in everything apart from defending the interests of Armenia and its citizens, had they been deployed in Armenia.

Otherwise, what would be the point of arming Azerbaijan with modern offensive weapons against Armenia? Russia does it, knowing for a fact that Azerbaijan is going to utilize those weapons at the first opportunity, as it happened in April 2016.

In reality, this is a part of the honed imperial strategy that has been invariably carried out by Russia over the centuries of their presence in the region. Promising to “defend” Armenia as its ally, Russia actually arms and financially supports the “ally’s” opponent, making that opponent the true ally of Russia.

Furthermore, under the pretext of the “defense” of an “allied” state and its citizens from the threat of total annihilation (which is provoked by Russia itself), Russia plans to deploy the peacekeeping troops of CSTO to Armenia in order for them to perform a function of a police to create and maintain a regime beneficial for Russia. Sabotage by some bribed local aborigines is also a part of the plan.

Thereby, the recent escalation at the direction of Nakhichevan is undoubtedly provoked by Russia in order to deploy “peacekeeping” forces in Armenia for the purpose of police control, as it has been with all other provocations over the years. The Kremlin stubbornly repeats itself, and everything they do is routine. The local paid aborigines are much more interesting and dangerous, so the security services of Armenia should start paying them increased attention.

Tags: The Task of CSTO is to Fully Control the Situation in Armenia