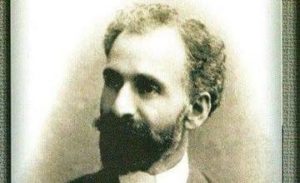 The fate of Armenian poet Hovhannes Tumanyan reflects the history of the Armenian people. In 1912, he was arrested and tried in St. Petersburg on charges of revolutionary nationalism. His three sons were killed by invaders: Artavazd was killed during the self-defense of Van, while Hamlik and Mushegh were brutally murdered by the Bolsheviks in 1937 and 1938 respectively.

We present to your attention the memoirs of Nvard Tumanyan, the daughter of the great poet.

“Armenia was overflowing with Western Armenian refugees. Tumanyan arrived from Tiflis in Etchmiadzin. It was the terrifyingly rainy night of August 16, 1915. The refugees were left out in the open. Father hastily left his room to settle people in the buildings. First of all, he had in mind the new unfinished building of the patriarchal chambers, which Catholicos Gevorg V Surenyants refused to provide to the refugees.

In spite of the Catholicos’s refusal, he led the refugees to the new building. The Catholicos did not like the behavior of Tumanyan. The next day, the Catholicos called father for an explanation but was unhappy with the answer and angrily said:

“Do you know that I am the Catholicos of all Armenians?”

“Do you know that I am the poet of all Armenians?”

We stayed in the hell of Etchmiadzin for about two months. My father expressed his dissatisfaction with the clergy and various refugee committees that could not organize their activities in order to help the refugees in a timely manner. He was upset and indignant when he saw in the warehouses food and clothing that had not been distributed on time and expediently. And he took up this difficult matter.”