The Feast of the Consecration of Grapes Was Today 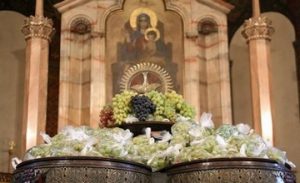 Once every year, on a Sunday closest to the middle of August, the Armenian Apostolic Church celebrates the Transfiguration of the Mother of God, which is otherwise referred to as the feast of the consecration of grapes.

On the day of this church holiday, all temples of Armenia are filled with the followers of the Armenian Church who come to take part in the liturgy. The liturgy is followed by the ceremony of the consecration of grapes. Interestingly, the roots of this ceremony lie in the pagan Armenian traditions. In the ancient times, Armenians celebrated the Armenian New Year – Navasard – each August.

In accordance with the tradition, ancient Armenians arrived at the churches the night before the holiday to wait for the feast day within the temples’ walls. With dawn, the congregation would begin preparing to the feast day. The celebration of Navasard was accompanied by sacrifices of animals, feasts, singing, and dancing.

Armenians believed that the consecration of grapes sanctifies their whole harvest. Grapes was chosen by Armenians simply due to the fact that Jesus Christ consecrated wine made from grapes and presented it to his disciples.

During the ceremony of the grapes’ consecration, the believers ask God to bless the grape seeds to let them bring people physical and spiritual tranquility. The clergyman then reads a prayer, blesses the grapes three times, after which the grapes are given out to the people.

The followers of the Armenian Church believe that eating grapes before their consecration is a bad sign. They also tend to preserve some part of the consecrated grapes until the next celebration of the Transfiguration of the Mother of God as a symbol of abundance and wealth.

Armenian Blessing of the Grapes Ceremony 2016

Tags: The Feast of the Consecration of Grapes