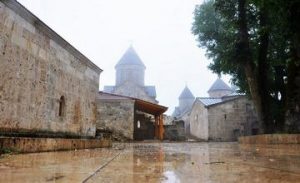 Standing next to the recently restored bell tower, priest Aristakes Ayvazyan said that only a divine intervention could help preserve the medieval Haghartsin monastery.

But it also required the investment of a Muslim patron sheikh Sultan bin Mohammed Al-Qasimi, the current ruler of the emirate of Sharjah.

“I cannot remember such a case in history like this. An Arab sheikh, a Muslim, helped restore and save the Armenian Christian church. Without a doubt, it was God who sent the sheikh to the Haghartsin monastery,” priest believed.

Haghartsin Monastery is a masterpiece of church architectonics of medieval Armenia and is located in the background of woodland mountains hundred kilometers northeast of Yerevan.

Founded in the 10th century, this monastery has three churches and once housed about 250 monks. It withstood the attacks of Arab and Turkish invaders as well as the anti-religious campaign of the Soviet government.

After all these misfortunes and decades of abandonment, the monastery came to the verge of total ruin. The growing plants already sprouted in the walls and the cracks threatened to send the monastery into oblivion.

“The monastery needed serious restoration, but the repair works were constantly rejected because of a lack of finance,” Father Aristakes said. So it was before the visit of Al-Qasimi.

“In 2005, his royal highness visited Armenia and generously offered to repair the complex,” Veridzh Neghvizyan said. He is an Armenian businessman in Sharjah who accompanied the sheikh.

Neghvizyan refused to say how much the sheikh invested into the repair works, but local media claimed that the investment was around $1.7 million.

After several years of restoration and construction of a new road to increase the number of visitors, the complex was finally opened.

“This is a gesture of humanity of His Highness and a manifestation of respect for other religions.”

Located in the Persian Gulf region, Sharjah is the third largest emirate of the United Arab Emirates after Abu Dhabi and Dubai. 78 years old Al-Qasimi, who came to power in 1972 after his brother was assassinated in an unsuccessful coup attempt, seeks to make Sharjah an active tourist and cultural center.

Despite the flourishing community of Armenian businessmen who built their own church in the emirate with a population of 900,000 inhabitants, there was very little connection between Yerevan and Sharjah. For those who worked in the monastery, the visit of the Arab ruler to a sacred Christian place left vivid memories.

“He arrived with a retinue of about 10 people and explored the churches and khachkars for a while before entering the main church of Saint Holy Mother of God,” Artak Sahakyan, who sold candles to visitors in the monastery at the time, recalled after sheikh’s visit.

“When the sheikh walked out, he said that he had heard the word of God in the church,” Sahakyan said. “Armenia is the oldest Christian country in the world, and its apostolic church belongs to the ancient eastern branch.”

The monastery is extremely important for Armenia. All three of its churches have been already included in the UNESCO World Heritage List. After the conflict between Armenia and its Muslim neighbors, Turkey and Azerbaijan, the workers of the Haghartsin Monastery hope that the support they received from the Muslim ruler will become an example of two religions getting along well.

“Sheikh is a deeply religious person, and it’s not surprising that the monastery’s poor condition touched his heart,” Ayvazyan said, “With this generous gesture, sheikh demonstrated that we can and must be tolerant of other religions since we all believe in one God,” he thinks. 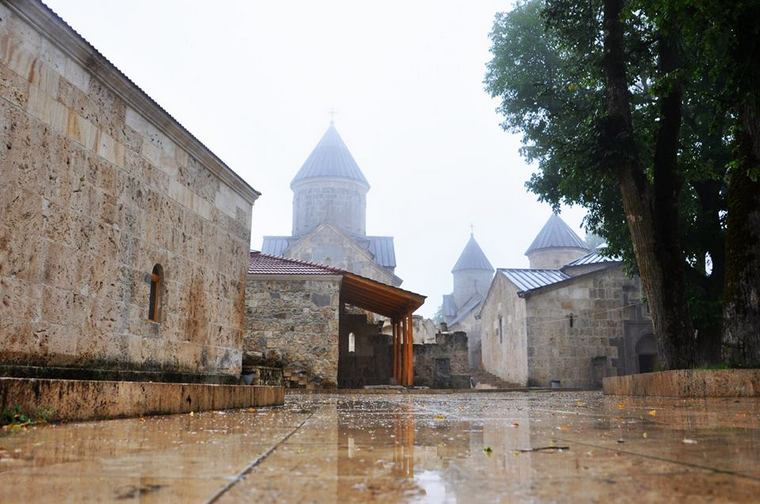 Tags: The Investment of an Arab Sheikh in the Restoration of a Christian Church